We Are In Annapolis - all bets are off 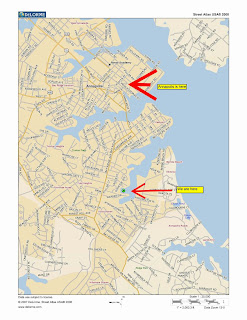 Quick post. We made the run from Chesapeake City to Annapolis over the past 2 days arriving Annapolis October 5 about noon.

Expected a madhouse but Back Creek was surprisingly calm. Not sure why but we expect things will heat up soon. That or the economic uncertainty has really taken a toll.

Pictures will follow soonest - We must take some first.

For now here is exactly where Meredith rests:

Just look for the Green dot on the map. Double Click on the Map and it will enlarge and become clearer.

Back Creek is a bit south of Annapolis proper but we are on a bus route and only a short dinghy ride from everything. Thank goodness for the new dinghy and the Tohatsu.

We tried to anchor midstream but an unfriendly New Zealander comes out with "Too Close, Go Away" routine. We suggested he ... well never mind but anyway we now hate everything Kiwi.

The upshot of it all was that we moved slightly downstream into a watery little cul de sac where,and in a move that seems to have stunned everyone down here, we tied up stern to the creek bank.

Apparently no one has ever backed up to a shoreline down here. Go figure. North Channel technique applies everywhere.

They do however like to drive backwards. Yesterday in Worton Creek we watched a man and wife on a Beneteau back up about a mile turn 90 degrees to port, dogleg 75 degrees starboard and then do a 270 to back into his slip - all at about 5 knts boatspeed. He stood on the forward side of the binnacle facing the stern and drove the boat like that. We stood on the fuel dock and applauded. They looked at us like we were nuts. Sometimes I wonder.

Now wanting to trespass on neighbouring homeowners property we used a stern anchor in soft mud and Meredith is firmly settled and immovable. Today's winds are forecast at 25 kt gusts so we will test our anchoring ability. We will be watching the Kiwi with a certain amount of evil intent.

More when we take pix.
Posted by Unknown at 4:01 AM