Apologies for the reduced blogging cycle. We have been experiencing serious problems with our wireless broadband connection and found ourselves cut off for several days.

No Pictures of Charleston

A pretty little tourist trap in the mid south Charleston resembles nothing so much as our home city, London ON. No longer earning a living Charleston has retired and concerns itself with universities and gentrified housing.

It is so clean and well painted and hygienic and full of pay as you go attractions you feel like you are in Toronto. Sort of Toronto lite.

Many of our friends rave about Charleston. We find ourselves less impressed. Beaufort SC is nicer by far: less of everything and therefore more.

We took no pictures.

Wandering about Charleston we found ourselves in a Cigar store. Cigars not being an approved expense of the Budget Committee, we quickly closed a purchase in a vain effort to "fly under the budget radar".

As we were leaving the tobacconist insisted on explaining to us that one very good thing resulted from the current swine flu outbreak: A man later diagnosed with the flu had shaken the hand of the President.

There was still hope for positive change in Washington he finished.

Maybe this affected our view of the city.

As reported while enroute from Fort George River we encountered some thin water. This guy was a textbook lesson in spin: 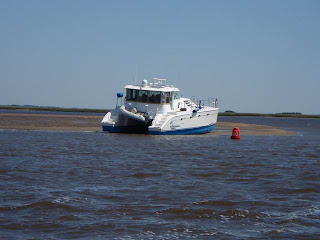 As we rounded a bend in the waterway we were hailed by the skipper of this catamaran. "Be very careful at marker 161" he advised. "Stay well to the Starboard side of the channel".

This radio "pan pan" was a clever attempt by the skipper to mask the fact he was outside the waterway.

Three hours later, while in the channel we found ourselves stuck hard.
As a boat approached our stern we called to advise we were hard aground and that the water to starboard was the best bet.

The approaching boat, Madkat, approached at speed on our starboard side. As he passed, the captain offered his sympathy for our plight and his wife, standing on deck offered a line to help tow us out. Just then Madkat found the mudbar and came to an immediate stop. The poor lady almost ended up in the water.

Here taking comfort that at least we were in the channel the skippers of Meredith and Madkap discuss the poor sap in the catamaran that had run aground outside the channel: 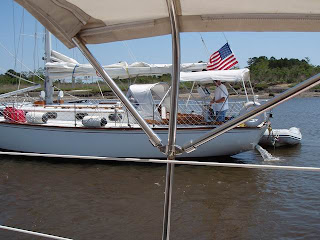 Yup we were much better sailors.

Just south of Charleston on Sunday afternoon we came upon the local version of "going to the beach". 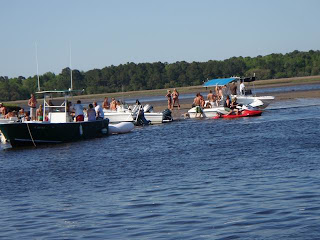 The sand spit was several hundred yards long and there were hundreds of boats, kids, scantily clad women. It was like a day at the beach but the beach was surrounded by water and you got there by boat.

Me and My Big Pen

Some of you will have read my blog on the Kingsley Estate and our visit to that plantation on the Fort George River. The "friends of Kingsley Estate" were concerned with my report and sent a nice but stiff email "clarifying" some facts:

Well readers, I stand by my report. I observed that all the outside workers were black and the inside staff were white women.

I did not see any slave quarters and I looked, not least because my friend Ben had commented on the lack of "restoration" of slave quarters at these plantations and the reason therefore.

We enjoyed our visit to Kingsley and find no need to alter reported observations.

The Final 1,000 Words on BabyKiller B 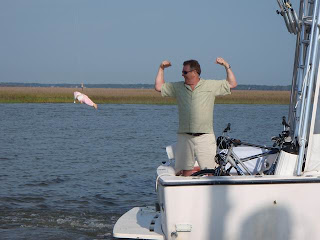