Vero to the Border, Good Places to Drink in St. Augustine, Ben's Theory on Slave Museums, Running Aground Again in Fernandina Beach

The race from Vero to the Georgia border having been done 4 times is getting pretty tedious. Here is how it played out for Meredith:

Nothing more to say.

A good anchorage right at the entrance to the municipal marina.

Met Radical Jack enroute from Cocoa to Titusville and heard all about the Tornado/White Squall while still enroute. Also were passed by Babykiller B: 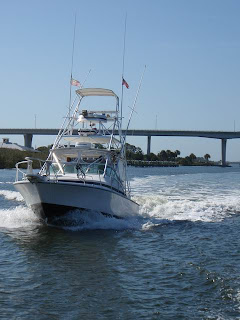 Presenting "Babykiller B"
Like all powerboaters the owners of Babykiller B have an irrepressible urge to show sailors how much money they waste just to churn up the water: 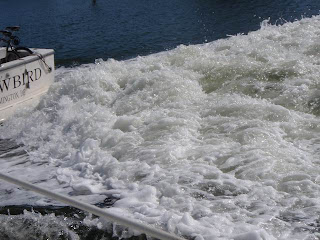 I know, the transom says "Snowbird" but
that was only until Donna Got ahold of it. Now it slays newborns.

And Yes: That is my lifeline in the foreground
Seabreeze Bridge (Daytona Beach):

Good Holding, nice weather. Ran into Steve aboard Searcher with whom we crossed to the Abacos. He too had his dinghy overturned in the squall. Trouble was his outboard was still on it. He just sat inside and watched it go.
St. Augustine:.

Great Anchorage, although not universally thought so. Lovely town.

Tradewinds, the local bar
Stogies the best Fumoir/wine bar/jazz club
Some Martini bar with a good keyboardist, a great bassist and the sassiest bartender I have ever met outside of St. Marys GA. Sadly I cannot remember the name of the martini bar.

Connie could not remember the way back to the dock. It was water and aspirin all night long for both of us.
Ft. George River: 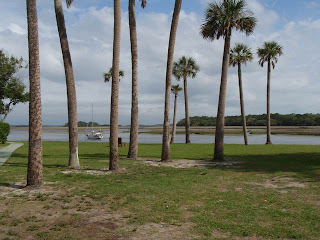 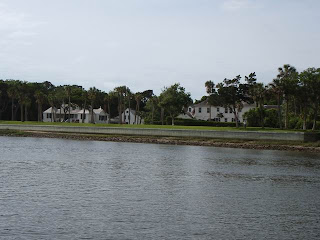 The Kingsley Estate - Sans Slave Quarters
Now this is one of the weird bits:

The reconstruction is nice, tended by pleasant black workers and run out of an office staffed totally by white women. The office sells nice clean books about slavery.

The estate, a reconstruction of an old cotton slave plantation, is complete with barns, fields, owners home. It is however missing the slaves' quarters. This is odd because there were a handful of whites and 100 or so black slaves.

Our friend Ben Blangez on Douce Folie V explains it: The white people have nice antiseptic museums about slavery. They describe in nice clean monographs that slavery was horrible and conditions abominable. What they will not do is show you just how horrible.

Apparently most of the plantation restorations omit the slave quarters. Must be a reason. I am betting on Benoit.

Anolther of the weird bits is that one of the slaves at the Kingsley Estate, ultimately married by the plantation owner and freed, found herself single and fended for herself. She established a successful business with 6 of her own slaves. Go figure.

We got very stuck on the way to Fernandina from the Ft. George River. We were mid channel and the chart, both electronic and paper showed 20 feet of water. The keel however disagreed. 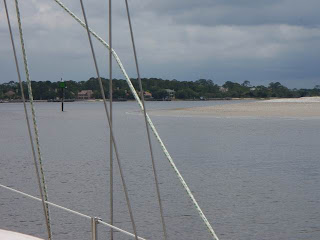 Would You Trust this Marker?
The Marker in Question marks the Right Hand Limit of the Channel
You can see the marker through the Rigging.

Now here is a question for you boaters: A thunderstorm had been forecast and had been brewing for about 4o minutes prior to our running aground. When did the thunderstorm hit?

Within 30 minutes I had two more boats for company. Everyone's charts showed lots of depth but none of us could move. Looked like a multicar pileup.

Fernandina is a nice town if you like pulp processing mills. For the other 5 billion humans it is a place to avoid. Some days it is hard to even sail past this odd little spit of sand.

Heading to the Fredericka River
Posted by Unknown at 4:34 PM