How Many Characters are There in Bock? 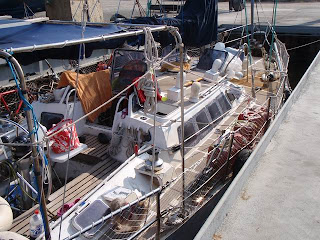 This boat was just sailed from France by a family of four.
Bock Marine is a good boatyard. Inexpensive, safe and capable of performing most basic work on boats at reasonable rates it is a yard to which we have turned and returned without regret.

It has its quirks however. Many of the quirks have feet.

Here are Wade and Diane who have literally built their own boat, Joanna, a Roberts 53: 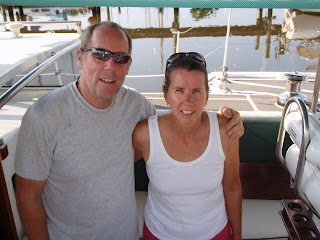 Wade had the steel hull built to his specs. Then he bought a farm with a barn so he could finish it. Ten years later he has a wonderfully overbuilt masterwork. Oh, during the ten years he served a couple of tours with NATO in Brussels and one in Croatia, got two masters degrees and married Diane. Diane learned how to sew, cook, navigate and manage Wade.

Here are Jean Francoise and Thwee. 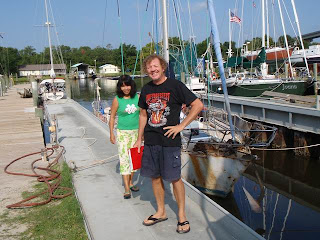 I do not know the name of their boat because the boat is so, well, rustic. You can see some of the rust running down the topsides just behind Jean Francoise. Tires for fenders, twenty or thirty water bottles stored on deck for who knows what, two kids and a dog. 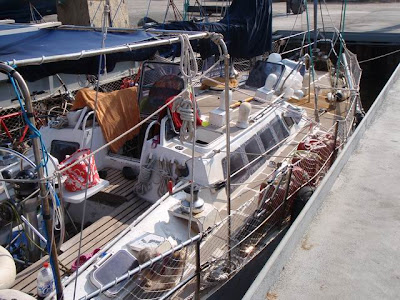 We do not know much about Jean Francoise as neither he nor anyone in his family speak a word of English. The four of them including a ten and twelve year old child sailed their boat with no name across the Atlantic. They arrived, cleared customs and wanted to store the hull at Bock. Language was a problem but as always things worked out.

And then there is the Bock on the Hard liveaboards, a group of 3 old men living permanently on their boats while maintaining the illusing they are fixing their boats. Like Sisyphus rolling his rock perpetually uphill these men repair their wrecks only to find more problems as they go along and then more problems and more problems.

There is the Canadian expat who came to Bock 10 years ago and has lived here in his van ever since. He hates Canadians for causing the collapse of our currency against the US Dollar and thus ruining his retirement pension. So angry is this man that Connie felt genuinely in danger of being struck by him in one of his not infrequent tirades.

A second walks around the boatyard clothed only in a bath towel. He informed me one day his boat would take 2 years to finish. This would be the same 2 years he told me it would take back in 2005.

Yet a third constitutes a complete mystery as he never speaks. Any hour of the day he will be found sitting in the lounge peering into the internet on his old IBM laptop. He never reacts when people come in or leave. He just taps away and gazes. I wonder if the abyss also gazes?

Of course the crew of Meredith are repeat visitors to Bock Marine. We manage to sign ourselves out after a few months of rehab but we never fail to return.