The Pasquotank to the Poquosan to Kiptopeke 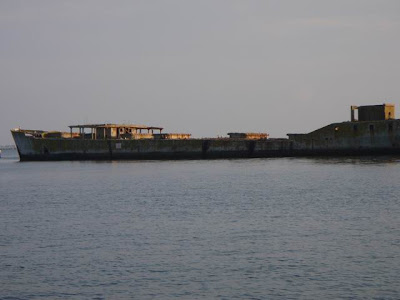 Today we set off from the Poquosan River, flipped a coin and settled on the Kiptopeke State Park as our destination. This park was described in the guide book as "known as a fine anchorage".

Wind was a variable 4 to 7 kts so we drifted across the Chesapeake at a princely 3 to 4.5 knots ourselves and considered it a fine demonstration of our sailing ability.

Arrival disclosed that the "fine anchorage" had been created by sinking a dozen old cement carriers to create a breakwater. It works I guess if you like rusty, filthy, cement coloured ships for your entire waterfront view and if the sound of several thousand guano producing skyrats.

As Connie says "It's such a nice sunset" 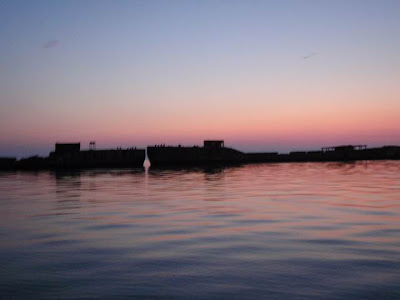 Sunset at Kiptopeke - You can just see the sun
over the prow of the two rust carriers
kissing in the foreground
At least it is safe here in the Chesapeake. Being close to Norfold security is tight. Last night we had lowlevel flyovers by heavily armed machine gun equipped helicopters. These flights are every half hour or so morning, noon and night.

I wonder if Bin Ladin's plan is to bankrupt the US through the defence budget. 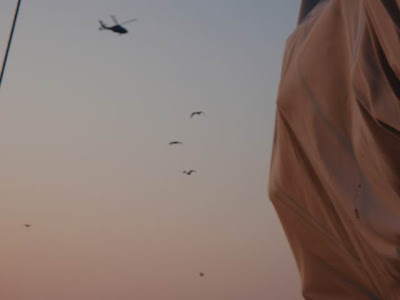 Several Skyrats performing highlevel surveillance.
Tonight we sleep the sleep of the just and the well documented.
Posted by Unknown at 4:59 PM