Toronto to Montreal - The End of the Journey 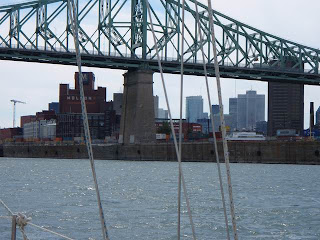 Downtown Montreal from the Cockpit
Coming through the St. Lambert Lock at Montreal Meredith had travelled the entire length of the St. Lawrence Seaway, every lock and bridge.  There's a big checkmark in our logbook for this one. 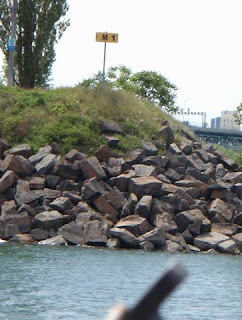 The Mile One Sign At the End of Ile Ste Helene
Our only surprise in the whole affair from Toronto to Montreal was at Montreal.  Just a mile west of the city the St. Lawrence throws a bit of a hissy fit - round about Lachine.  Simultaneously the river narrows, shallows and turns.  The result is the Lachine Rapids.  Nasty water best avoided.

Meredith avoided it by taking the large ship Canal de  Rive Sud.  Easy going, protected from wind and current it made easy sailing.  Our plans to stay overnight in Old Montreal required that, upon our exiting the Canal, we turn West and backtrack about 2 miles to the protected old harbour.

That last line did not impinge on our consciousness either until we made the turn.

We took the Canal to avoid the rapids.  Exiting the Canal we turned into the force of the river which was just finishing its release of pent up frustration.  It was fierce.  We were motoring into a 5 knot current.  Meredith only makes 6 knots at cruise.  So for an hour and a half we fought the St. Lawrence, sometimes to a draw, sometimes losing a step or two.

The Current Against Meredith as We Turned Towards the Vieux Harbour
Just After The Mile One Marker
Arriving at the old harbour we immediately saw our speed over ground increase to 6 knots.  From 1 to 6 in under 5 seconds.

Today, our day to explore the City, we walked from the point where we turned to run up the River to get to the Port of Call of Old Montreal, the name of the downtown marina here.  It took 7 minutes to walk.  Yesterday it was a voyage of more than 90 minutes.

So Old Montreal is fun and we are glad we are here.  We are the only sailboat in the marina.  We know why. 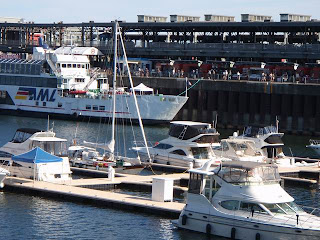 Meredith Alone and Resting Hard at Port of Call of Old Montreal
Posted by Unknown at 1:45 PM