The A Team Approach to Navigation

As nice as it is when a plan comes together it can be rather, well, dull.

Leaving Montreal we faced apprehension over two issues: the Richelieu Rapids and the Saguenay River.  The first of these, the rapids, we would face on our second day out of Montreal bound for Quebec City and it is with this we concern ourselves today.

Leaving Port d'Escale Montreal was a joy.  The 5 knot current which had set us so unfairly on our attempt to gain entrance to the safe harbour was now with us.  Leaving the safety of the Vieux Port we could see the edge of the river beyond the mouth - a wall of water moving at great velocity.

Nothing for it but to jump in and so we did.  This time our acceleration was from 6 knots to 10.8 in under 5 seconds.  Shiny!!

Not that we were anxious to leave Montreal.  We really enjoyed walking about the old city, watching the buskers, taking in the offerings of the patio bars. 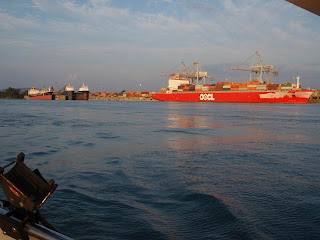 Beyond the Vieux Port (Old Port) in Montreal
Lies a Miles Long Working Harbour
Each of us had slept poorly on the night before departure, the call of Morphius rudely interrupted by concern over the upcoming running of the Richelieu Rapids.  We were out of sorts for a good part of the day but fortunately Meredith does not run on good intentions.

Her diesel carried us along the St. Lawrence at a robust 7 to 8 knots all the way to Trois Riviere.

There are few anchorages between Montreal and Quebec City.  In fact there was only one which we considered acceptable, the west branch of the Riviere Saint Maurice just east of Trois Riviere.

Leaving Montreal at 6:00 a.m. we made our anchorage by 4:30.  Entrance to the river was a bit tricky due to its narrowness - only about 6 feet of usable channel was available to us.  Once in we found a current of about 2 knots as the Saint Maurice delivered its aqueous contents to the master St. Lawrence.  We travelled a half mile or so upriver and Connie dropped the hook.

As I backed down on our trusty CQR we could feel the boat sliding backward along the bottom as the anchor reached into the river muck seeking a hold.  Security at anchor had not yet been achieved when the diesel shuddered and died instantly.

Our dinghy painter had wrapped itself around the prop shaft and stalled the diesel.  Now this was interesting.  We were sitting in a 2 knot current with a hook that had not set.  Our stern was aimed at a massive shoal across the mouth of the river.  Hmmmm.

Connie got goggles and knife while I stripped in the cockpit.  No time was wasted on conversation.  I was over the side in under 30 seconds.  The painter cut away easily. 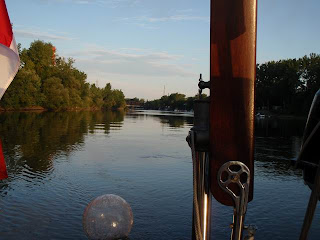 At Anchor Along the West Branch of the Riviere Saint Maurice
Anchor down and set to our satisfaction the crew of Meredith were in their beds by 7:30 p.m.  Fellow boaters informed us there would be fireworks at 10 that night.  Maybe there were.

This morning we were up by 5:30 a.m. and ready to face rapids.  We had planned our approach to the rapids, which are located just past the town of Grondines so that we would arrive at maximum flood tidal current.

The rapids are a problem because the current of the St. Lawrence which normally runs at .5 to 2 knots is increased due to a narrowing of the river.  This current is increased further by the tide.  At ebb tide the tidal current alone can be 5 knots.  Put it all together and you have a maximum current of 8 knots.  Naturally this extraordinary flow is running at a location in the river where there is a narrowing.  Outside the channel depths are fatal to a keel boat.

If we timed our run of the rapids to coincide with a flood tide (tide flowing up the river) we reasoned that this would reduce the usual river current.  It was hoped this would give us an easy ride.

It worked in spades.  When we got to the rapids there was no current at all.  By the time we exited the Rapides Richelieu we were actually being set about 1/2 knot due to the tide.  There was no turbulence to speak of. 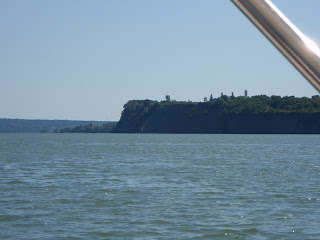 The South Shore of the St. Lawrence just at Port Neuf.  Beautiful.
Out of the rapids by 11 a.m. we entered the marina at Port Neuf intending to meet up with friends Ben and Andree from Gatineau.  We wait now for them to arrive and look forward to spending the next however long enjoying their company.