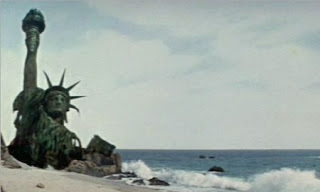 Time to be Moving On but the City does not give up easily.


We had been Guggenheimed into submission. Conni 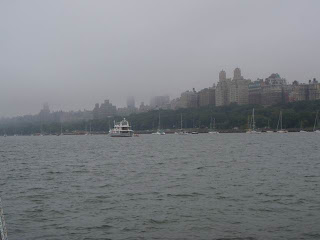 e was so MoMA'd I was looking for the remnants of alien pods in the bilge. "She looks like my wife but she doesn't act like my wife". We had to escape.

The weather conspired to keep us in the 79th street Boat Basin yet two more days while we waited for a weather window down the New Jersey Coast. My beloved did not trust my assessment of the chances for a Saturday Run claiming it was more like a "bathroom window" than a weather window.

Thankfully Benoit and Andre, friends from Douce Folie V, had been stuck in Great Kills NY for the same time we had been stuck in New York and they were looking for diversion. They called, which was a lovely thing to do. It persuaded us to try our luck moving from NY to Great Kills.

It was dicey. By 11 the fog had lifted. FIFTY FEET. At least I think it was fifty feet. Using my Captain Ron calculator I looked up and could not see the top of my mast. Since the mast is 56 feet I am confident that the ceiling was 50 feet. Visibility was at least a mile. Pretty much of a mile anyway.

My view was that it didn't matter. Since we did not know much about New York Harbour I reasoned it would not help to be able to actually see it. Besides I could dead reckon my way there. I took my Power Squadron piloting courses. But about those ferries, and sightseeing boats, and barges and container ships and tugs. They were not on the CPS program so I just did not concern myself.

Well, I lost my copilot in the Narrows. She started to dither and mumble about not knowing where she was. I pointed out it wouldn't help if she could see the shore because the danger was really the shallow bottom. This did not help.

She retired from the game.

We we made it to Great Kills. We have not got off the boat since arriving. I am drinking for the rest of the night. Connie made a nice Risotto for dinner. I suspect she did this so she could finish the bottle of wine she opened and out of which she needed one glass for the rice. In fact I look now and can confirm she has done this. Right now we are closer to submariners than boaters. As luck would have it I am reading "Das Boat" right now.

We might start speaking tomorrow. Not necessarily to each other but the rudiments of communication may return.

Arriving at Great Kills we found there was no line on the mooring ball. Connie took one of our lines in her teeth and while I manoeveured Meredith close to the ball she did an inverted situp over the side. Twenty Seconds later our line was strung and Meredith Secured.

Connie has moved from undergrad to PhD in the vagaries of mooring ball construction.

Rain and storm tomorrow so we will just drink with Benoit and Andre. How sad.
Posted by Unknown at 3:29 PM