While transitting the Hudson River enroute to New York you must eventually pass a lovely little town by the name of "Coxsackie". You do not have to take my word for it. Here is a shot of the map: 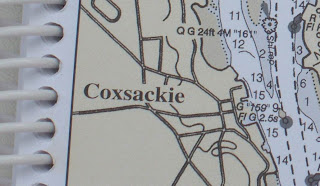 When you ask a local citizen, as I was wont to do, as to the source of the unusual name you will be informed that it is a Native American Indian name which means "Hoot of the Owl".

Now, being a touch juvenile, I am thinking this is really another example of the subtle Native sense of humour which totally flummoxed a bunch of fairly dumb white guys.

You can set the scene:

The Natives, having been cheated out of Manhattan by soulless Dutch traders (as opposed to equally soulless British and French traders) ceded a town to the white guys and insisted they call it Coxsackie, telling them it was a Native word meaning "Hoot of the Owl".

Every time there was trading to be done one Native would tell another "Yeah, I gotta go upriver and negotiate with those [fill in the name of what you would call someone who came from Coxsackie]".

This would be an early example of the Cheyenne Autumn phenomenon.

Cheyenne Autumn was a traditional b grade oater shot on location on a Navaho reserve. The director insisted the native "extras" speak native.

This movie packs the movie houses in Arizona to this day. Can you imagine what those "savages" are saying? About Chief Little Dick and what did whose wife do to whom?

Just a little payback from a subtle and gentle people. Gotta love their sense of humour.
Posted by Unknown at 11:12 AM