A Little Off the Top 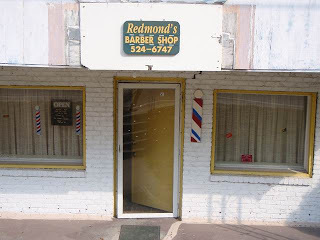 Al Redmond's Parliament
Nine days had passed since Connie and I had left Meredith our 38 foot sailboat and it had been a month since my last trim.

Walking down the parkway in Beaufort, SC we passed "Redmond's Barber Shop". Properly unassuming this building had the right feel, even from the street.

I hate going to a new barbershop, especially a good one.

Walking into this one I encountered Al Redmond, the barber and moderator of the discussion group at Redmond's Barbershop. 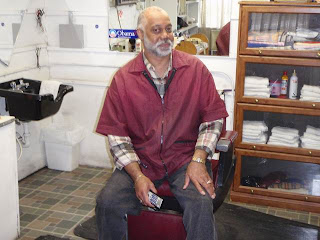 "Don't Shut That Door" comes the gruff tone of a man whose domain had been improperly intruded upon. This was Al.

"Sorry" was the sorry response I muttered as turned and reopened the inside door I had so carefully closed a fraction of a second earlier".

"I like to see who is coming up on me" says Al.

This was what I hate about new barbershops: you have to prove yourself every time you go in one.

Sizing up the room I see Al clipping the hair of a man already in the chair and whose name I never got. Beside the is Mike, a wiry man.

Wiry describes Mike's personality as well as his build. Mike did not offer up his name until the very end of this adventure. Prickly would be another good word to describe Mike, but only until he gets to know you. 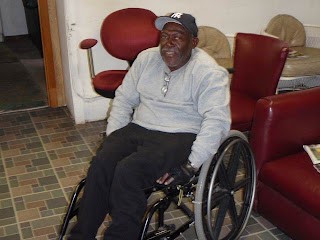 In a new barbershop you have to start slow and ease your way into the conversation. My merely walking into the place had lowered the cones of silence, ending all conversation.

I was third up so I had about 40 minutes to put in and 40 minutes of uncomfortable silence was not looking survivable.

"Holmes on Homes" was on the tube so I tried "You guys like Mike Homes?"

"Usually watch the game shows about this time" rejoins Al. Nothing but mumbles from Mike or the man in the chair.

"I hear he is gay" Usually this will get things going a bit. "He is very popular back home".

"So I suppose you support this Proposition 8 then" asks Al. Oh, oh. This is the gay marriage proposition. Al's idea of a gentle probing question is the verbal equivalent of caressing the listener with barbed wire. Ouch.

"We have had gay marriage back in Canada for about 5 years now" I answer, hoping that is the proposition to which he is referring. Having committed myself to a position I carried it a bit further: "So far the social fabric has remained intact. So, yes, if I was in California I would support it".

Al tried to stifle his disgusted reply but manages only to give himself a coughing fit. The man in the chair laughed. Mike just sat there.

"Well, you asked". I said turning to find my jacket to leave.

This opened it up. "Sit down. It's not your turn yet" says Al.

The four of us spent the better part of an hour talking Obama, economics, bored stupid rich people, the "heritage" of Beaufort and a whole lot more.

In the course of the discussion I learned that both Al and Mike had served in Vietnam. Mike served two tours of duty. As he explained to me, motioning to his wheelchair "The second tour was short. It messed me up". These guys earned their opinions and at times they left me speechless, sometimes with mirth, sometimes in wonder.

My hair trimmed I had to take leave, rejoining the Budget Committee who was tending to the laundry. On the way back from the laundromat we passed again in front of Redmond's barbershop.

I waved from the street knowing that Al would see. This was a comfort.