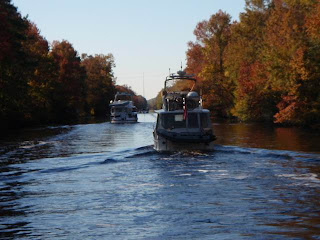 Not usually a sensitive sort of guy I did pick up on the displeasure of the Budget Committee, my earnest wife, Connie. Our boat Meredith was approaching a fork in the Pasquotank River and my long suffering spouse had just been told that I did not know which branch to take.

Not much turned on the choice: the correct branch took us to a free dock and a wine party in Elizabeth City, the other left us with several hours of trying to break free from the cold muck and buried tree stumps which seem to comprise pretty much all of North Carolina.

We were cold. Night temperatures on the water had been in the mid 30's. It was now 4:30 p.m. and the sun held only another half hour of honest heat.

How Did We Get Here?

Leaving the Dismal Swamp southbound Meredith, along with 6 other boats, was locked down 8 feet at the South Mills Lock. This dumped us in the Pasquotank River, a deep but narrow and twisty river which would carry us to Elizabeth City, NC.

Being a polite guy, who knows that sailors have long memories, I pulled Meredith over and slowed to allow the two trawlers amongst the 7 boats in the locking to pass. As the trawlers passed my wife commented on how filthy the water was: both boats left a frothy wake in the brackish water.

My actions were not as humanitarian as it may sound.

This did not describe the pilot of Meredith.

Allowing the trawlers to lead, I reasoned that now I had a guide through the byzantine twists and turns of the Pasquotank. At many points in this river there were tributaries and feeder streams as larger as the river itself.

Everything worked very well for the first two miles. Then the trawlers, travelling at 8 knots to Meredith's 6.5 pulled far enough ahead that we could not keep them in continuous visual contact. Not too worrying though as they were still in view as we exited each bend we would still spy them and regain our visual guide.

Too good to be true you are thinking?

Well of course it was.

As the river widened the turns increased in radius. Finally Meredith came around a final bend to find .. NO TRAWLERS.

And of course A FORK IN THE DAMNED RIVER.

Quick, look at the map and find your ... Forget that. A snakes and ladders game had fewer twists and loops than the Pasquotank.

Not to panic. Just examine the two branches carefully. One of them had to have some physical feature that suggested it as the proper route.

Nothing to choose from and the time to do something was approaching rapidly.

After her initial restrained comment, reported above, in which she so artfully blended both surprise and dismay my wife grew supportive. "Well, we have to do something, and fast. Why don't you slow down?"

"Nope" was the monosyllabic response.

Every sailor reading this will know why I could not slow down. Meredith was first boat out of the lock. We permitted two trawlers to pass for good reason but the other four boats were still behind us. There was no way I could slow my course and admit incompetence to any of those four boats.

The fork loomed large ahead. Feverishly two minds in the cockpit of Meredith addressed the need for navigation input as armageddon bore down on us, or, more correctly I guess, as we bore down on armageddon.

"What?" was my reasoned response.

"Find bubbles" she asserted. "Look for wake residue. There has to be some froth or something".

She took the bow and stood before me, an armless figurehead. "I see it. I see froth."

Her left arm shot out. "Hard to Port".

Some men would have dismissed the whole venture as too outlandish.

I turned to Port. (of course I started out following trawlers, so what did you expect?)

Turning at 6.5 knots Meredith did not successfully fight all the heel in the sharp turn and it was a bit hairy for a second or two. Things hit the floor belowdecks.

We did not hit bottom. No slithering to a dead stop, our full keel encased in North Carolina's finest swamp bottom. No cedar logs chewing away mighty chunks of our fibreglass hull.

When the seconds accumulated to a minute we knew we were on to something. "It works. Keep looking for spittle".

For the next half hour the Budget Committee held the bow and guided us unerringly, one patch of soap suds at at time, to the widening of the river we had been expecting.

Coming into a final turn, approaching a long train bridge with a narrow passageway the vessel behind us surged forward gaining on us, its the crew yelling. We figured they wanted to pass us before the bridge so we slowed to let them. There was not much fight left in us.

"No. No. We don't want to pass." comes from the other boat. "We are following you. But turn on your radio".

Turning the VHF back to 16, from which I had switched to stop the incessant chatter of nitwits disturbing my earlier mental efforts, I was informed that the boat behind had no idea how to navigate the river. They were following us but we were so definite in our navigation that they had telephoned ahead and confirmed that there were free docks for all of us in Elizabeth City. Could we please speed up a bit so they could make the bridge opening?

The captain offered compliments to my "guide" for her unerring navigation. He had been taking his cues from her.

"She is very good" commented the captain. "What signs does your wife find up on the bow to figure out what channel to take?"

I faked radio interference.
Posted by Unknown at 1:08 PM