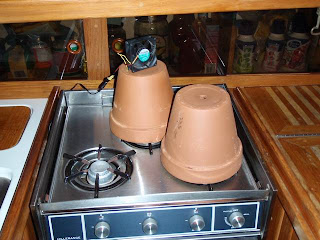 With the temperature back in the low 40's the Budget Committee finally broke down and agreed to buy a propane fired cabin heater.

The problem was the $30 heater was at Walmart and Walmart was a $35 cab ride away. No bus system in Beaufort, I mean Bewfort.

So, stealing the idea from Lynn Pardy, we went to Grayco, the local hardware store of choice and bought two pottery plant holders for $3. These we placed over the burners on the stove and the burners were lighted to a low flame.

This morning I wired up an old used computer fan and we now run on 1 burner with a fan supported on the other flower pot, I mean heater element. On one burner at 1/3 burn I am now in shirtsleeves at the computer. And we are using the large gas tanks not the little ones at $3 a pop.

Gord, a good friend of ours on Mystic explained cruisers' attitude towards spending money: "The wind is free." Gord says "Everything else should be"

The crew of Meredith flies into Ontario on December 3. This is a couple of weeks earlier than expected. Asked by friend Tim McKinlay how we were traveling I explained: "A couple of Red Bulls and We will Grow Wings".