The League of Women Sailors Rises to Ascendancy

The Annual Meeting of Pursers and Quartermasters, St. Marys, GA
Rita from El Rio demonstrates technique to Barbara Ann from Onward,
Connie and and an unidentified practitioner of the rites of sailing -
Notice there are no men at this table
Meredith made its way from Jekyll Island to St. Marys GA in a short though not uneventful 40 mile day. The passage, over shallow bottom in narrow passageways, kept the helmsman and crew on its toes hoping to avoid tows.

Each year about the last day in November a fleet of boats converges on St. Marys GA.

No Notice to Mariners or encrypted message from COMFLEETATL preceeds this massed movement of men and material. Rather, just as the Black Pearl's Compass drew Jack Sparrow to pirate treasure so does the rumoured promise of roast turkey cause all compasses in the amateur fleet to divert to St. Marys. 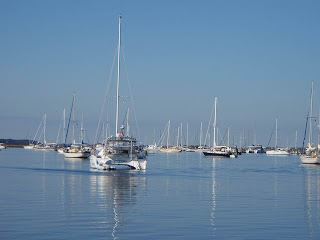 The Fleet at St. Marys Anchorage. In the three hours following this shot the population doubled.
St. Marys, you see, puts on a free Thanksgiving Dinner for Cruisers. (Despite the similarity in appearance and quality of diction of the diners a free dinner for cruisers should not be confused with a similar function held at the local Men's Mission on the same day.)

Whenever a disparate group of sailors finds itself in a new and strange port nature takes over and all are drawn lemming like to the nearest bar. In the photo at the outset of this post Rita from El Rio was demonstrating proper barroom technique to to her compatriots.

The guys already had it figured out: 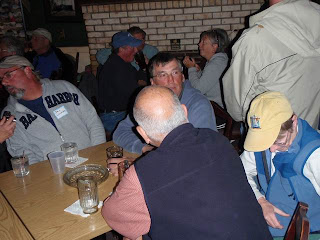 Gary from Going South, Mike from Resolute, and Karen and Kent from Breezeaway have already had their lesson from Rita.
(Faithful readers will recall that Meredith first met Resolute on the docks at Waterford, NY.)

The affair started years ago as just dinner on Thanksgiving Day but, as these things do, has grown. It now occupies almost a full week ending on the morning after Thanksgiving with a "Hair of the Dog" Mimosa party and swap meet. 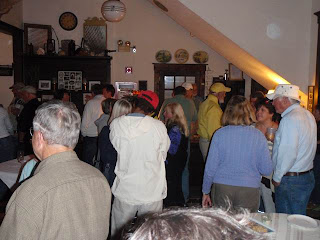 On the day before Thanksgiving there were three separate drinks parties so everyone could get to know everyone else. Meredith only attended one of these. We had to find our way home after all.

Dinner itself is a real Stone Soup affair where every boat brings a side dish and the townfolk cook turkeys. Mind you this year they cooked turkey for 189 people who arrived in 69 boats and several cars. (you remember the story about the vagrant who showed the poor villagers how to make soup from a stone)

Men walked the docks all morning, homeless, having been thrown off their boats while each woman prepared their best Thanksgiving side dish. With pride of the galley at stake there was no room on 38 feet of boat for mere men.

But the dinner.... well... Can you imagine Thanksgiving Dinner with 69 side dishes, each prepared by an experienced cook determined to preserve her self respect and place in proper society? No you can't. Trust me.

Despite each woman taking quantities of food sufficient to feed 4 boats not one boat took food home.